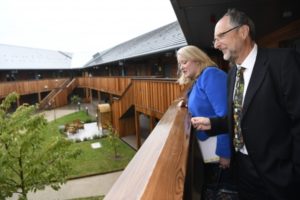 Linkwood View welcomed its first residents in September 2017 and is specially designed with innovative high-quality services including dementia, wheelchair adaptation and Extra Care facilities.  The site has won multiple awards including Social Housing Development of the Year by Premier Guarantee and a commendation from the Saltire Society who said it provided “a template to provide future care to a growing elderly demographic with dementia.”

Christina McKelvie was given a detailed tour of the site, meeting staff and residents.  She also met with children from the Magic Roundabout nursery which borders Linkwood View.

To encourage intergenerational interactions, Hanover has gifted a small part of the large garden area of Linkwood View for the nursery to maintain to allow them to grow their own plants and lowers.  Not only has this assisted with outdoor educational activity for the children, it has engendered an intergenerational understanding between the residents and the nursery children.

Helen Murdoch, Chief Executive of Hanover Scotland, said: “We are delighted that the Minister has been able to officially open Linkwood View and see the innovative approach we have taken to ensure we have suitable housing for older people, linked to their health and social needs.  Linkwood View is part of a major investment by Hanover Scotland in the North East of Scotland, totalling £29.5m since 2015.”

“As well as innovative design and facilities, we are also committed to better engagement with residents and the local community.  At Linkwood View, children from the nearby Magic Roundabout Nursery have been involved in the project from the beginning, being able to see the construction progress and also now an ongoing role with part of the garden, encouraging interactions with residents.”

“This is a really good example of the kind of innovative thinking we want to see around the care for older people as and when they might need it.  It allows older people to retain their independence for longer, which is so important, and can also tackle other issues such as social isolation.”

“This facility has made a huge difference to elderly people in Moray as well as their families. It’s been really rewarding to be involved. Following the success we’ve had with this project, Linkwood View has been used as a template for similar prospective facilities elsewhere in Scotland in partnership with Hanover.”

You can find out more about which cookies we are using or switch them off in settings.

This website uses cookies so that we can provide you with the best user experience possible. Cookie information is stored in your browser and performs functions such as recognising you when you return to our website and helping our team to understand which sections of the website you find most interesting and useful.

This website uses Google Analytics to collect anonymous information such as the number of visitors to the site, and the most popular pages.

Please enable Strictly Necessary Cookies first so that we can save your preferences!